My path to Orthodoxy began with the Lutheran Church (Evangelical Church in America), where I was baptized and raised in a faith with an appreciation for liturgical services and a sense of the sacramental relationship between man and God.   It wasn’t enough, though.   After a disinterested period during my early college years, I slowly rediscovered my interest in the church life through encounters with Evangelicals and campus ministries.  I started occasionally attending a Lutheran church close to the Texas A & M campus, but it was a visit to a boyfriend’s Pentecostal  church in deep East Texas that solidified my preference for liturgical worship.   After graduation in 1987, my husband and I moved back to San Antonio (we had been married in my childhood Lutheran Church in 1985), and I started going back to church with my mother.   She was thrilled, but I did it reluctantly, knowing that at the time I was doing this I was still seeking something different.  I think my search for the Orthodox faith really started as a young adult’s desire to do something rebellious, adventurous and different.

In early 1990, I had started a new job and one of my co-workers was a young Greek woman.  My impending renewal of membership at my childhood church and my doubts about this spiritual commitment were the topic for a casual conversation one day.   She off-handedly mentioned that she was Greek Orthodox and suggested that I visit her church.  She was definitely not the model one thinks of as an evangelist, which just goes to show you the Lord uses all His children for His purposes even when they don’t know it themselves.   It also serves as a warning that what we say or do can have the most important or the most devastating consequences for someone’s soul.  My co-worker’s advice made me pull out the phone book and find an Orthodox Church - in this case, St. Anthony’s - and just call the priest.  I made an appointment to meet him at the church mid-week, showed up for the next Sunday Divine Liturgy, and never, ever went back to my Lutheran Church.  Mind you, only the previous Sunday I had stood up in my Lutheran Church and made a pledge to renew and recommit myself as a faithful Lutheran.  Four days after meeting with the priest, I stepped into the very worn and unspectacular temple of St. Anthony’s and was instantly “hooked."  The beautiful church  you see today is so much different from the former building with the “ambiance of a VFW Hall,” as St. Anthony’s priest Fr. Dmitri Cozby used to say.

On the feast day of St. Herman of Alaska, December 13, 1992, I was chrismated into the Orthodox Church and took the saint’s name of St. Joanna the Myrrh-bearing Woman.  It was undoubtedly one of the most important and life-altering days of my life.  I have now been an Orthodox Christian for 20 years, and I can’t say I’m a better example of one today than I was in 1992.  My initial convert zealousness (or overzealousness) has changed into something stronger and steadier; a faith that must be constantly renewed by a commitment to the sacraments, church attendance, prayer, fasting, and spiritual reading.  I would not recommend Orthodoxy as an easy path or one to take on a whim.  Since my chrismation, I have had many spiritual struggles, even crises of faith, but I can say I do not regret becoming Orthodox for one instant.  And with God’s mercy and despite my own failings, at the end of my earthly life, I look to eternal life in His Heavenly Kingdom. 
I am what is lovingly referred to as a “cradle Orthodox Christian.” At the time I was born, both of my parents were practicing members of the Orthodox faith, and they decided to have me baptized as an infant. I have been a member of St. Anthony the Great Orthodox Church for as long as I can remember, and except for two years when my family lived in Pennsylvania, I have attended services and Sunday School (until I was 18) regularly. I'm no saint, but I have been active in the church as a Sunday School teacher, a parish council member, and now as the appointed bookkeeper. The other members of the church have always been like an extended family to me.

Once I got to elementary school, it didn't take me long to realize that my religion wasn't common or well known. I had to explain to my friends -and teachers- what Orthodoxy is, which was a difficult task for an eight-year-old who wasn't well versed in any other background, but it was made easier with my religious education at home and at church. Since people were always so curious about my faith, and because I wanted to be able to explain Orthodoxy better to others, I sought to learn about other religions in addition to my own. My parents never discouraged this, but made sure I had a full understanding of Orthodoxy along the way. I had long, meaningful conversations with devout believers of other faiths. On occasion I attended services at other churches. I read books written by prominent religious leaders. I studied the history of all the world's major religions in college, graduating with a minor focus in religious studies. Through all this, my faith was deeply rooted in Orthodoxy and none of my learning ever made me stray from that. In fact, it only helped to increase my belief.

I have had trials and troubles in my life, like anyone else, and my faith was always a comfort to me. Although it didn't happen overnight, if I had to choose a “moment of enlightenment," my high school Sunday school class really sticks out as when my faith became something I believed in for myself, rather than just going along with what my parents encouraged. We were assigned to read “Ascending the Heights: A Layman's Guide to the Ladder of Divine Ascent” by Fr. John Mack. We took almost the entire school year to read and discuss that book. We were encouraged to think critically about each chapter and apply it to our lives. We were allowed to ask tough questions and expect meaningful answers, which is something many of my non-Orthodox friends, most of whom do not attend worship services anymore, felt they were missing in their church lives.

My husband was raised Roman Catholic and introduced to Orthodoxy during high school when we met. He converted to Orthodoxy before we were married and now we are raising our daughter in the church as well. My faith started out as a family tradition but became an educated choice.  I have always found fulfillment in my religious life so I am happy to continue the tradition. 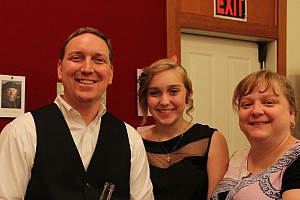 I was called to Orthodoxy in the fall of 1991.  I was baptized and chrismated on Lazarus Sunday of 2009.  I first encountered the Ancient Faith as a minister in a protestant church through the conversion of my college roommate.  I was usually frustrated in my ministry career by the vast disunity I encountered on a daily basis.  It seemed that everyone had their own understanding of God and the Church (including me) and that understanding was subject to change at any given time.  The capacity to "make it up" as we went along was exhausting.  I was immediately drawn to the endless bedrock of Orthodoxy and comforted that I no longer had to figure all of this out on my own.  My delay was simply born out of fear.  Fear of not having a way to make a living, fear of disappointing my parents and fear of alienating my wife were intimidating stumbling blocks for me.  By the summer of 2008 all of these had been removed in one way or another and I approached the local parish with the attitude of "where else can I go, You alone have the words of eternal life."  I have never regretted coming to the Church, only that it took me so long.


If you are interested in sharing your story or participating in community outreach, please contact Tina Gilson.