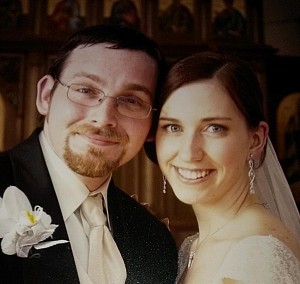 I am what is lovingly referred to as a “cradle Orthodox Christian.” At the time I was born, both of my parents were practicing members of the Orthodox faith, and they decided to have me baptized as an infant. I have been a member of St. Anthony the Great Orthodox Church for as long as I can remember, and except for two years when my family lived in Pennsylvania, I have attended services and Sunday School (until I was 18) regularly. I'm no saint, but I have been active in the church as a Sunday School teacher, a parish council member, and now as the appointed bookkeeper. The other members of the church have always been like an extended family to me.

Once I got to elementary school, it didn't take me long to realize that my religion wasn't common or well known. I had to explain to my friends -and teachers- what Orthodoxy is, which was a difficult task for an eight-year-old who wasn't well versed in any other background, but it was made easier with my religious education at home and at church. Since people were always so curious about my faith, and because I wanted to be able to explain Orthodoxy better to others, I sought to learn about other religions in addition to my own. My parents never discouraged this, but made sure I had a full understanding of Orthodoxy along the way. I had long, meaningful conversations with devout believers of other faiths. On occasion I attended services at other churches. I read books written by prominent religious leaders. I studied the history of all the world's major religions in college, graduating with a minor focus in religious studies. Through all this, my faith was deeply rooted in Orthodoxy and none of my learning ever made me stray from that. In fact, it only helped to increase my belief.

I have had trials and troubles in my life, like anyone else, and my faith was always a comfort to me. Although it didn't happen overnight, if I had to choose a “moment of enlightenment," my high school Sunday school class really sticks out as when my faith became something I believed in for myself, rather than just going along with what my parents encouraged. We were assigned to read “Ascending the Heights: A Layman's Guide to the Ladder of Divine Ascent” by Fr. John Mack. We took almost the entire school year to read and discuss that book. We were encouraged to think critically about each chapter and apply it to our lives. We were allowed to ask tough questions and expect meaningful answers, which is something many of my non-Orthodox friends, most of whom do not attend worship services anymore, felt they were missing in their church lives.

My husband was raised Roman Catholic and introduced to Orthodoxy during high school when we met. He converted to Orthodoxy before we were married and now we are raising our daughter in the church as well. My faith started out as a family tradition but became an educated choice.  I have always found fulfillment in my religious life so I am happy to continue the tradition.