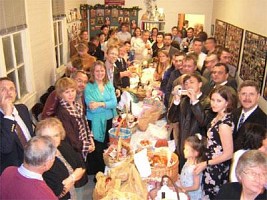 Saint Anthony the Great Orthodox Church is a parish of the Diocese of the South (http://www.dosoca.org) of the Orthodox Church in America (http://www.oca.org). The Orthodox Church in America (OCA) is the successor of the North American mission of the Church of Russia and traces its beginnings to the first missionaries sent to Alaska in 1794. The OCA was given "autocephaly", or independence, by the Russian Orthodox Church in 1970. The primate of the church holds the title of "metropolitan" and resides in Washington, D.C., but the church's central headquarters are in Syosset, Long Island, New York. The OCA's membership is mostly Russian, Ukrainian, Carpathian in background, with large numbers of Romanians, Bulgarians, Albanians, and many converts who derive from the American melting pot.

Saint Anthony's was organized in 1979 under the leadership of Father Gregory Roth, the chaplain at Lackland Air Force Base. The founding members included a number of Orthodox civilians who had been attending services at the Lackland chapel and a few other Orthodox families without active parish affiliation. The first pastor, +Father John Schreiber, arrived in August 1979.

The first Liturgy was held at the Episcopal Student Center chapel at San Antonio College. During the early years the congregation held services in a variety of temporary locations. In 1982 Saint Anthony parish purchased its present temple, the former First Congregational Church building. This brick church was designed by Alfred Giles, a renowned local architect of the turn of the century.  The city of San Antonio designated it an historic structure in 1988. For that reason, it is also referred to as The Historic Giles Church.  The interior of the church was initially remodeled with work and materials donated by the parishioners. A baptismal font was given by Saint Sophia Greek Orthodox Church in San Antonio.

Father John left for another parish in 1986. His temporary replacement, +Father Nazario (Ipac-Uribe), a priest-monk from Holy Ascension Cathedral in Mexico City, served for six months. Very Rev. Fr. Dimitri Cozby arrived with his family in 1987 and served the parish until 2005.  Rev. Fr. Brooks Ledford served on an interm basis.  The Very Rev. Fr. Leo Poore arrived in January 2006 and served until his retirement in 2019. The current pastor, the Rev. Fr. David Wooten, began serving the parish in September of 2019.

Extensive renovations of the fellowship hall and church school annex were begun in 1987. The parish hosted the Diocese of the South Assembly in 1991 and 1997. The parish carried out an extensive renovation of the temple's interior in 1992. In 1996 another project improved access to the temple for the handicapped through the addition of a wheelchair ramp. In 1998 the front steps to the temple were thoroughly repaired and renovated to correct structural problems and to add new hand rails. In 1999 Saint Anthony's celebrated its twentieth anniversary and was granted the status of a full parish by His Eminence, Archbishop DMITRI of Dallas.

In 2004 Saint Anthony parish completed a major renovation of its attached hall, expanding space for educational activities, ministries, and fellowship. In 2005 the parish initiated a major campaign to restore the temple to Orthodox liturgical standards, culminating in the installation of a custom made, hand-carved, limewood Iconostas, together with twenty-six, hand-painted, traditional, Byzantine style icons to adorn the new icon screen. A number of liturgical appointments were also received.  These items were crafted for Saint Anthony parish by two Bulgarian artists: +Mr. Peter Nedkov, Master Woodcarver, and +Mr. George Goutsev (Our Iconographer), Master Iconographer, both based in Sofia.  The installation of these adornments was completed in November 2006.  A Dedication Liturgy was held on February 10, 2007.